SIGNIFICANCE OF FOREIGN ENTREPRENEURSHIP IN FUKUOKA

Foreigner Owned Businesses and Their Impact

Fukuoka City benefits from the presence of a deep-rooted, diverse group of foreign nationals eager to express their entrepreneurial talents. This group has invested its time, money, ideas and energy into creating an international community that sustains The City's internationalization movement and "Foreign Direct Investment" hopes.

Self-employment by foreign entrepreneurs helps alleviate unemployment concerns in the foreign community while offering career alternatives to the local workforce. Self-employment directly addresses the reality of limited opportunities for foreign workers (professional or otherwise) within the Japanese "Kaisha".

The presence of a productive foreign entrepreneurial community represents the landing pad by which "Internationalization through foreign direct investment" can succeed. Education, housing, recreation and a diverse social structure are essential issues affecting any foreign company's decision to post a workforce abroad. 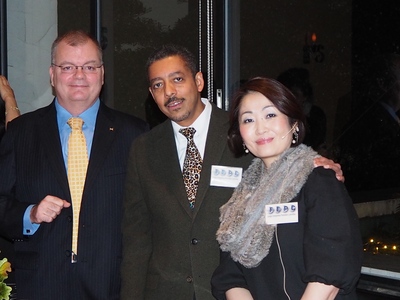 Foreign entrepreneurs and their companies contribute equally to city, prefecture and national tax coffers as do their Japanese counterparts, therefore making them eligible for social services and business support services from the Japanese government and business associations.

Foreign residents disseminate information internationally through their business and family ties. Therefore, they are essential to the process of formulating Fukuoka's international image, through their travel and news proliferation.

Looking healthy and robust, Mr. Carlos Ghosn, CEO Nissan Motors, took center stage in Fukuoka’s International Congress Center. Mr.Ghosn stood for the better part of two hours, expounding on the topic of motivation, while a capacity crowd of 3,000 guests from Fukuoka’s “kaisha”  world sat complacently in their seats. A motivational speaker he delivered an animated and powerful speech; though its highs were met with silence by the audience. Indeed, awkward silence that followed his pauses was no doubt disappointing to a speaker accustomed to an “alive” live audience.

Mr. Ghosn spoke about Nissan’s roots and history in Kyushu. Established in 1933, the company opened its Kyushu plant, Nissan’s largest, in1975. Now it celebrates 70 years in business while Mr. Ghosn enjoys bragging rights for leading a miraculous three-year turn around under his “180 Program.” “The solutions lie within the company,” he said  “Once you accept the job, you assume full responsibility for the company’s past, present and future.”  He went on to outline three key principals in his management approach:

1)    Vision: Management must have a strong vision for the company.
2)    Motivation: A motivated workforce is the ultimate power.
3)    Performance: The execution of the task will determine its success or failure.

When questioned about being a “foreigner” leading a Japanese company, he was quick to point out that he is an “outsider” in Nissan and that an “outsider “ could also be Japanese. When asked about the relationship between “process” and “results” by an English speaking Japanese guest  (groans by the crowd not withstanding)  he responded, “With good results people are not so interested in the process. Profitability is the engine that drives the company; it must figure into your plans from the very beginning.”

Through a comment no doubt aimed at Japanese bureaucrats everywhere he said, “...we must accept changes to achieve performance.” (I can only hope Tokyo was listening.)
Before being adorned with flowers and literally being asked to leave, Mr. Ghosn departed with these last words: “In life it is better to pursue a goal and fail than to never have goals at all.”

Mr. Ghosn’s future goals include assuming the CEO post for Renault in 2005 while maintaining his present post as President of Nissan.